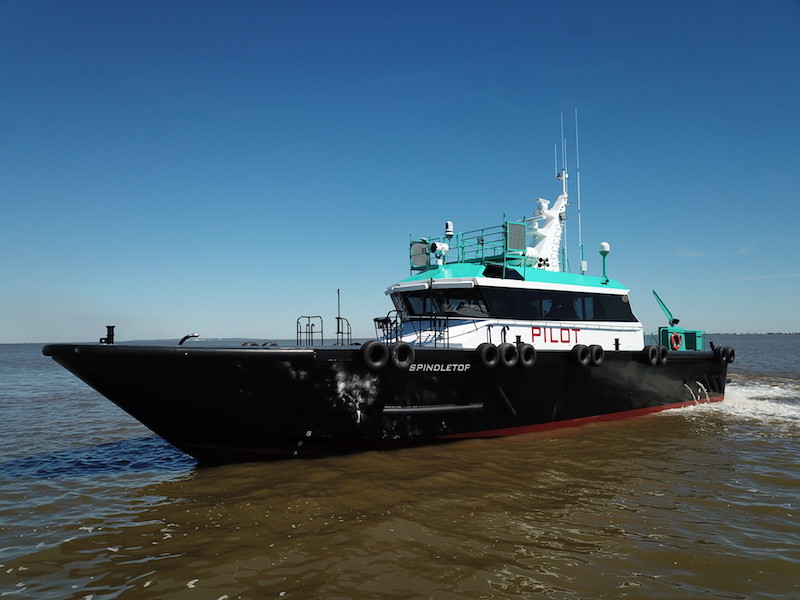 “This is the biggest pilot boat built in the U.S.,” said Roy Breaux, the shipyard’s owner. “There are bigger ones in other parts of the world, but this is the largest in the U.S.”

Breaux’s Bay Craft has specialized in building aluminum offshore crewboats for decades. However, the shrinking of the oil and gas industry in the Gulf of Mexico and the pandemic have forced the shipyard to further diversify. “We have produced hundreds of pilot vessels in the past, but we delivered our first pilot boat with the New Generation Deep-V bottom to the Tampa Bay Pilots Association, a 54-footer, in November 2019,” said Breaux. “This same bottom was used on the Spindletop.” 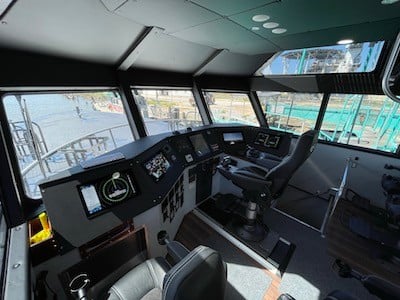 Designed by Breaux’s Bay Craft and C. Fly Marine Services, the new Spindletop has two boarding platforms on the bow, port and starboard, and two overhead on the pilothouse, port and starboard. Rescue assist equipment includes a SeaLift custom-built rescue platform on the transom with a 24V hydraulic unit and a transom jib pole with a 120V electric winch. The rubber bumper system is a combination of D Bumpers and aircraft tires around the perimeter.

“The boat ran six pilots out in its first hour of operation,” said Breaux. 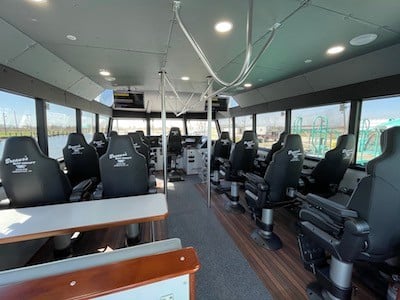 Inside the pilothouse are 15 NorSap 1600 chairs and one NorSap 1700 captain’s chair with controls, VHF speaker and microphone in headrest, steering and three VHF push to talk buttons on armrest.

“We went to Breaux for a custom-built pilot boat that would maximize safety and comfort for our 17 mile stretch in the Gulf of Mexico and could not be happier with our choice,” said Kenneth Leslee Hurd, boat superintendent, Sabine Pilot, Unit 31. “The Spindletop with its 4 Hamilton jets coupled to the 4 800 hp Scania engines, Humpree active ride trim tabs, and Breaux’s new hull design she cuts thru our constant 3-4 ft chop that we run on a daily basis with ease. Another great feature from Hamilton is their new AVX(boat mouse) system that allows the operator to maneuver the vessel with ease in restricted areas.” 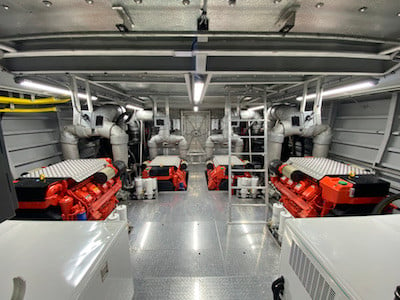